Feedback for those who supervise others

Companies invest a lot of money in the people who manage others. Why not give them regular 360 degree feedback to help them improve their performance? For example, if a company is paying a manager $75,000 per year, why not spend a few hundred dollars each year to give him or her specific, actionable feedback? With the G360 Manager Survey, people almost ALWAYS get something they can use to improve their performance.

A senior manager at the Nissan Corporation was interested in getting 360 degree feedback to help him improve his leadership skills. The assessment was launched and before he knew it he was getting detailed and actionable feedback from his direct reports, peers and supervisor. The 360 review was both eye opening and helpful. Before long, he wanted his assistant managers to go through the 360 process as well. Each time the feedback came back with new insights and suggestions for improvement.

Because the 360 review process was so helpful on a personal level and within his team, the manager recommended that all the managers at his location go through the process. And that’s exactly what happened. Over 100 engineers at their North American Technical Center voluntarily took the G360 Manager Survey. The HR department was so committed to using the tools for developmental purposes that they didn’t even want to see the results. They wanted to guarantee to the participants that the 360 degree feedback was only for them and for their benefit. After the managers got their 360 reviews, the HR director confirmed that it had been an extremely successful talent development project. 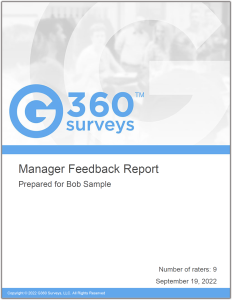 The G360 Manager Survey measures 16 core competencies grouped into four major categories. Click on any of the 360 review competencies below for a detailed description of that competency along with suggested videos, books and websites to help improve in that area.

Get Started
Scroll to top